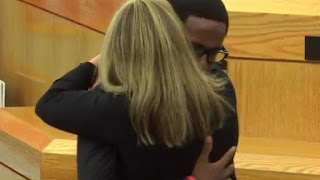 Normally, we wouldn’t really go back to a topic so soon after covering it, but an interesting case study in forgiveness took place recently and has stirred up quite a bit of controversy. Last year, a white off-duty police officer named Amber Guyger entered the home of Botham Jean, a black man, and killed him. According to Guyger, she had mistaken Jean’s apartment for her own, and upon entering and finding him there, she pulled her gun and killed him in what she claimed to be self-defense. Her account of the incident didn’t hold water for many who took this incident to be just another example of police officers killing black men unjustly. This incident was particularly egregious because the victim in this case was completely innocent of any wrongdoing and was, by all accounts, a very good person.

Guyger was found guilty of murder, which surprised those who had come to expect the police to always get away with killing blacks. However, her sentencing of only 10 years for the murder angered many, who believed that 10 years was far too short for the killing of an innocent man. At least one person, did not seem enraged by the short sentence. Brandt Jean, Botham Jean’s teenage brother, sparked a debate of sorts when he took the opportunity in court to forgive Guyger and gave her a hug. To some, the act was a shining example of Christian principles. Young Brandt had done something many people could not. He had chosen to forgive the person that had taken a loved one away from him and his family. Many applauded him for the act and pointed to his act as an example of the kind of humanity this world needs to see more. As discussed in the Forgiveness: Hard But Necessary blog entry, forgiveness is an essential part of the Christian walk.

However, many did not agree with what Brandt did. In fact, many were maddened by it and saw it as an example of what was wrong with the Black community and Black Christians specifically. They argued that such forgiveness was always one-sided and pointed out several cases where black people were convicted of similar or even lesser crimes and did not receive the same forgiveness. Many of the critics believe the tendency of Blacks to forgive to be a weakness and that Brandt’s action could only hurt the Black community by giving the impression that no matter what is done to Blacks, they will just roll over and take it. The criticism is harsh, but, to some extent it is true. Christian forgiveness is not guaranteed to turn enemies to friends, and some will look at the tendency to forgive as a sign of weakness. However, much of the criticism seems to be born from a lack of understanding about Christian motivation.

First, Christians don’t forgive because they are naïve enough to believe that their forgiveness will automatically change the ones being forgiven or the world at large. As we discussed before, we forgive out of obedience to God (Luke 17:3-4). We forgive as an acknowledgement that we ourselves are also guilty of sin and were forgiven by God (Colossians 3:13). Yes, some acknowledge the possibility that by forgiving someone, you may change that person’s heart, but hardly anyone believes that change is a guarantee. Few believe that an act of forgiveness, even one as public as Brandt Jean’s, will rid the world of racism and its other ills. The critics seem to be hung up on the idea that Brandt forgiving Guyger was somehow a gift to Guyger. They don’t realize that forgiveness can benefit the person doing the forgiving as much as it does the person being forgiven (Mark 11:25).

That’s part of the reason those critics can look at Brandt’s action as one born of weakness. They think that he gave something to the person that murdered his brother. In reality, it is more likely that he unburdened himself. His brother was murdered. He probably felt a mixture of emotions as an example – pain, anger, and even hatred. He knows exactly who committed the injustice, so Guyger likely acted as the target for all those emotions. Anyone who has experienced such emotions knows they can be like weights that can hold a person back and keep that person from moving forward. Guyger was basically the tether that tied Jean to those weights. By forgiving her, Brandt may have been able to cut that tether and give himself the chance to leave those weights behind. Maybe his actions will help Guyger deal with what she’s done and grow as a person. Maybe she doesn’t care about the forgiveness. Either way it doesn’t really matter, if Brandt’s actions allow him to recover from the trauma that resulted from the loss of his brother, then clearly his actions were beneficial.

Blacks have been and still are brutalized in this country. Often, Blacks have found themselves having to be the ones to accept wrong doing and move forward without compensation or even contrition from those guilty of the misdeeds. It certainly does seem unfair for one group in particular to be put in that position especially when the same understanding and forgiveness is rarely offered in the opposite direction. Still, Christians shouldn’t aim to do what is right out of the belief that we will be treated in kind. In fact, the Christian expectation should be that our good acts won’t be returned in kind. After all, Christ spent his whole life doing good and was thanked by being beaten and murdered. Being Christlike doesn’t mean being weak though. A weak man couldn’t have endured what Jesus went through before reaching the cross. A weak man wouldn’t have used his dying breaths to advocate for those that put him in that position. That was the example Jesus set for Christians. That was the example young Brandt chose to follow. It wasn’t easy or fair for Jesus, and it probably wasn’t for Brandt either. The truth is that doing the right thing is hardly ever the easiest thing to do. That doesn’t mean it shouldn’t be done, and if people only do the right thing in times where there they can expect it to be reciprocated, it’s unlikely anyone would ever do the right thing. So it is on Christians to take the hard step, and even if there is no reward or recompense in this world, we will have pleased God and that will matter when we move on to the next world.

Nonbelievers may not ever understand or agree with what Brandt did. When Christians point out that what Brandt did was what Christians are supposed to do, some nonbelievers take that as proof that Christians are naïve and problematic. The harsh criticisms that Brandt has received demonstrate that. Christians have to learn a lesson from this. Christianity is about love, faith, and righteousness. One would think that exhibiting those things would endear others to you, but that is often not the case. Sometimes doing what you feel is right as a Christian will only turn people against you and gain you enemies. That doesn’t mean Christians should walk around with a persecution complex as some do, but Christians do need to understand that following Christ may leave you alienated and at odds with those around you, especially if you are surrounded by nonbelievers.

In fact, everyone who wants to live a godly life in Christ Jesus will be persecuted - 2 Timothy 3:12

The above verse sounds dire, and one might wonder why it has to be true, but Jesus explained clearly why it is so.

If you belonged to the world, it would love you as its own. As it is, you do not belong to the world, but I have chosen you out of the world. That is why the world hates you. – John 15:19

Unfortunately, what Brandt Jean did was not typical in our society. It was an aberration. In this world, we’re led to believe that we should be angry and hateful and vengeance seeking, and anyone who doesn’t fall in line is either aiding the enemy or is also an enemy. As Christians, we have been given a set of principles and we have to stand on those principles whether everyone applauds us for it or hates us for it. That’s what Christ did, and who’s a better example than him?

Posted by United Baptist at 3:58 PM