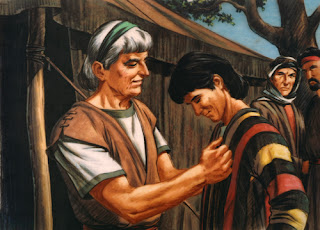 Joseph was the son of Jacob, and like his father, he had an interesting life. However, unlike his father, Joseph did not get put on a strange path because of the wrong that he had done. Joseph was portrayed as being good from the start. Maybe he was a little too good, at least, that’s how those around him might have thought. The first thing we learn about Joseph is that he was known to snitch on his brothers.

Joseph, a young man of seventeen, was tending the flocks with his brothers, the sons of Bilhah and the sons of Zilpah, his father’s wives, and he brought their father a bad report about them. - Genesis 37:2

Maybe telling on his brothers the way he did was the right thing to do, but right away we see that Joseph had to learn a lesson that many of us have also learned. When you do the right thing, it might gain you some allies, but it can most certainly also gain you some enemies. The story goes on to tell us that Jacob (now known as Israel) loved Joseph more than his other sons, and that Jacob’s other sons hated Joseph because of it. Side note: It seems people in the Bible were pretty open about showing favoritism for certain children and it almost always resulted in bad consequences. So, while the parenting wasn’t exactly the focus of these stories, maybe that’s a little extra lesson parents can learn from these stories. Don’t show favoritism. Love your children.

Joseph’s relationship with his brothers was exacerbated when he told them about a dream he had that suggested that one day his brothers would bow to him. The Bible doesn’t say whether or not he understood these dreams were messages from God. Still, it was no secret that God could communicate in that way. After all, God had chosen to communicate with Jacob in the same way. However, Joseph rushing to tell his brothers about the dream suggests that maybe Joseph was a little naive.  If he understood that his brothers didn’t care for him, he should have known that him bragging about such a dream would rub them the wrong way. Yet, he told them anyway, and when he had another dream that delivered a similar message, he told his brothers again even though the Bible tells us that they had a bad reaction to the news of the first dream. He also told his father after the second dream, and even his father was unhappy with the revelation.

When the story continues and we find that Joseph’s brothers plot on him and eventually sell him to some merchants, many of us might think ‘he should have seen that coming.’ His brothers convinced his father that Jacob had been killed, and, at the time, they believed that was the end of Joseph’s story as far as it related to them. On the contrary, his story was just beginning, which shouldn’t surprise anyone. After all, Believers should know that if God tells you something is going to happen, it’s going to happen.

Joseph found himself in Egypt and was purchased by one of the Pharaoh’s officials, a man named Potiphar. Unlike Joseph’s brothers, Potiphar recognized Joseph’s goodness and appreciated it. Being an Egyptian, it was unlikely that he was a follower of God, but even he was able to recognize that Joseph was favored by God.

When his master saw that the Lord was with him and that the Lord gave him success in everything he did, Joseph found favor in his eyes and became his attendant. - Genesis 39:3-4

The story goes on to tell us that Joseph was propositioned by Potiphar’s wife. As expected of a man like Joseph, he did the right thing and turned her down. In response, she lied on him out of spite, and Joseph found himself in prison. Once again, someone, this time the prison warden, was able to recognize God in Joseph and treated him with favor. Eventually, we find out that, Joseph is not only blessed with dreams that portend the future, but he is also blessed with the ability to interpret dreams. This time dreams didn’t lead to misfortune for Joseph. Quite the opposite, his ability to interpret dreams got him out of prison and into the service of the Pharaoh. Joseph was able to interpret the Pharaoh’s dreams when all of his advisors had failed. Pharaoh was so impressed by God’s revelation through Joseph that Pharaoh put Joseph in charge of all of Egypt second only to Pharaoh in authority.

Take a moment to understand how amazing that is. Joseph went from slave to the second most powerful man in Egypt all because of God working through him. If that isn’t uncanny enough, then also consider the fact that Pharaoh, a man considered to be a living god by his people, elevated Joseph in such a way because he recognized God in Joseph.

The Pharaoh said to Joseph, “Since God has made all this known to you, there is no one so discerning and wise as you. You shall be in charge of my palace, and all my people are to submit to your orders. Only with respect to the throne will I be greater than you.” - Genesis 41:39-40

With God’s favor and the authority given to him by Pharaoh, Joseph was able to do some very important things like preparing Egypt for a coming famine that devastated much of the world. Joseph’s status also put him in a position where he had the choice to either punish or forgive his brothers. He chose to forgive them, and just as his dreams foretold, they wound up bowing to him. Fortunately for them, the dreams were never meant to show that Joseph would lord over them in a bad way. The truth is that the dreams were a sign that one day Joseph would be his family’s salvation. In the end, things turned out great for Joseph and his family all because he made a point to live righteously and because God was pleased with him for his righteousness.

There are so many lessons we can take from this story. As Believers, we are set apart from the other people of the world in some ways, and we are expected to do the right thing even if it’s not the popular thing. Like Joseph, living that way can send us through a multitude of ups and downs. Doing good doesn’t mean that every part of our lives will be good, but whether we are at a high or a low, God is with us. If we know that, then we should do our best to make sure that everyone else knows it too. God being in us saves us, but His presence in us can also change the hearts of those around us. It can also save those, who at one time, were against us. In some ways, Joseph’s life is like a blueprint for the lives of Believers. We may not reach the highs that he did or sink to the same lows. However, we can all expect similar dynamics in our lives. We just have to remember that if we live as God commands and always keep him at the head of our lives, like Joseph, we and many that we encounter along the way will win in the end.
Chris Lawyer
﻿
Posted by United Baptist at 11:02 PM