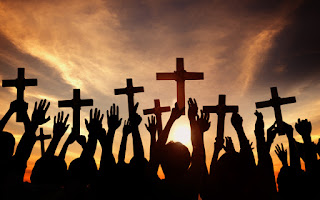 Culture is defined as the customs, arts, social institutions, and achievements of a particular nation, people, or other social group. Cuisine, language, literary works, style of dress – these all act as elements of a culture and, in many cases, are clear indicators of a particular culture. If you see a person Hula dancing, you’d probably immediately think of Hawaii and the natives of that island. That’s just how strong the influence of cultural elements can be. Everyone who sees or partakes in them knows exactly which culture they represent. Christians as a group have an associated culture too. Does the culture that is associated with Christianity fairly represent Christ? That’s an important question because if the answer to that question is anything less affirmative than “absolutely,” we are doing something wrong.

For example, music is arguably one of the most important elements of any culture. Music is universal and almost every culture has its own style of music, which is easily identified as being representative of that particular culture. Christianity is certainly covered in that area. Whether it’s through contemporary Christian music or Gospel rooted in the slave customs of the past, Christians have definitely found a way to use music to praise and worship God, spread the Gospel, encourage other Believers, and accomplish a number of other tasks. The use of music in service of God was well established in the Bible.

Shout for joy to the Lord, all the earth. Worship the Lord with gladness; come before him with joyful songs. – Psalms 100:1-2

These verses from Psalms make it clear that we are expected to use music in our worship and praise of God. In fact, the inclusion of Psalms in the Bible is proof of just how important music is to the Christian experience. After all, Psalms is largely a collection of songs about God and dedicated to God. They aren’t solely just for praise either. Consider the many songs from David like Psalms 56.

Be merciful to me, my God, for my enemies are in hot pursuit; all day long they press their attack. My adversaries pursue me all day long; in their pride many are attacking me. When I am afraid, I put my trust in you. In God, whose word I praise—in God I trust and am not afraid. What can mere mortals do to me? – Psalms 56:1-4

David isn’t just praising God in the song. He’s explaining the goodness of God. He’s giving a testimony. Maybe some of the musicality of the song has been lost in translation and with the lack of the accompanying melodies, but the meaning is still crystal clear. Religious songs are a dime a dozen these days, but are they all really like those that David wrote? Does your favorite Christian song truly capture who God is and what he's done? Does it really put into perspective how important Jesus is? We have to be careful that we don’t allow the culture to be watered down. Anything put out there to represent Christianity should do that in a truly substantive way and not just in name. That isn’t just true for Christian music but also for any other element of Christian culture whether it be Christian movies, liturgical dance, or Bible influenced clothing.

Culture isn’t just about artistry and works though. The customs and values held by a group of people are also elements of its culture. For example, the term “Southern Hospitality” is often used to describe the customs of the people in the southern states. Friendliness is considered to be part of southern culture. In contrast, indifference to the needs and circumstances of others is often associated with more urban places like NYC. So, depending on the customs associated with a particular culture, that culture can be seen in either a positive or a negative light. To make things more complicated, a group might seem to have a singular culture from the outside, but in truth be made of a bunch of smaller subcultures. That’s how America is. As suggested above American culture includes both southern and urban subcultures among others.  The various American subculures are easily recognized by people that live in the country. However, people outside of the country may not recognized the distinction. What happens when different subcultures exhibit opposing characteristics? In those cases, we see intracultural wars – battles for the spirit of the larger culture. This is a problem we see in America today. Unfortunately, it is also a problem facing Christianity. It shouldn’t be though. The difference between America as a group of people and Christians as a group of people is that there is no core guidance that defines what American culture should be and what characteristics Americans should portray. Christians, on the other hand, have the Bible, which defines Christian culture and identifies what characteristics are fitting of the people within the culture.

Put on then, as God's chosen ones, holy and beloved, compassionate hearts, kindness, humility, meekness, and patience, bearing with one another and, if one has a complaint against another, forgiving each other; as the Lord has forgiven you, so you also must forgive. And above all these put on love, which binds everything together in perfect harmony. And let the peace of Christ rule in your hearts, to which indeed you were called in one body. And be thankful. – Colossians 3:12-15

In those verses, Paul is explaining what characteristics should define Christians and by extension Christian culture, but are they the characteristics that those outside of the faith would attribute to Christians now? Or would they say that Christians are mean spirited, judgmental, unforgiving, and cruel? Maybe only a few people who claim to be Christians portray those negative traits, unfortunately, in today’s world the actions of a few often unfairly reflect on everyone in a group. So, your bad actions might not just be attributed to you. They might be seen as being reflective of all Christians and even Jesus himself. The last thing any true Believer should want is to badly represent Jesus.

Today, we Christians are in the middle of a culture war. On one side are the people who seek to ensure that Christian culture reflects what’s in the Bible and does Jesus and his teachings justice. On the other side are people who call themselves Christians but indulge in a culture that is anything but Christ-like. We must do everything we can to ensure that we are on the right and winning side of this battle. We must win for ourselves and for the Lord because our job as Christians is to bring others to Him, but if we are associated with a culture that makes Christ seem like someone that should be avoided, we can’t fulfill our mission. So, let us be sure to indulge in the music and other works that glorify God, but let us also strive to only engage in the customs that represent what God expects of us. Because if Christian culture doesn’t reflect Christ then we’ve already lost the war.

Chris Lawyer
Image Courtesy of www.evangel-temple.org﻿
Posted by United Baptist at 12:51 AM