You Don't Work, You Don't Eat 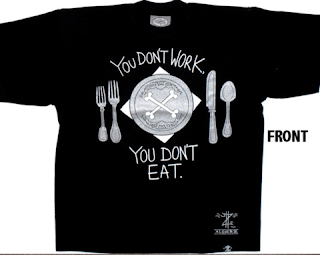 Sometimes, it is easy to get a false impression of how Believers should conduct themselves in this world. The Bible is a big book and packs a lot of information. It offers instruction for virtually every aspect of our lives. At times, it can even seem like the instructions contradict each other, but usually those contradictions come from a misunderstanding of what the Bible is actually saying or a lack of context with regards to what one passage may be saying versus another. A lot of times scripture is presented in one or two verse segments to highlight a point someone wants to make. While using scripture in that way isn’t necessarily wrong, sometimes such usage can work against true understanding of what God is trying to present to us. When focusing on those one or two verses, we may miss the greater point made by all the surrounding verses. For example, let’s look at 2 Thessalonians 3:10:

For even when we were with you, we gave you this rule: “The one who is unwilling to work shall not eat.”

Like with many Bible verses, this one has entered common lexicon and been simplified even further. Everyone has heard the statement If you don’t work, you don’t eat. In today’s world, there is almost a constant debate about what responsibility we as people have to each other. How much are we supposed to help those who are down on their luck, out of work, sick, etc…? The shortened version of the Thessalonians verse is often thrown out as a means of dismissing the idea that we should help certain people. Unfortunately, that is another example of the all too common misuse of Biblical scripture.

The Bible gives us clear instruction to help those in need.

And do not forget to do good and to share with others, for with such sacrifices God is pleased. – Hebrews 13:16

Our first inclination should not be to find a loophole that allows us to escape our responsibility towards our fellow human beings. That’s a distortion of what God wants from us. Ultimately, as Christians, we are supposed to be spreading the Word of God. We are supposed to be living examples of the goodness that was first represented in Jesus. Sure, conmen and grifters exist, but if we simply dismiss them and move along, how can we introduce them to the Word? How can we allow them to see what a godly person looks like? Maybe we can’t reach people like that. That’s certainly a possibility, but we weren’t commanded to pick and choose who we treat with love. We were just commanded to love. Jesus, during his travels, certainly encountered unsavory people, but he did not treat them any differently than anyone else. He spread the Word to the good, the bad, and everyone in between. That is how we should be too, and if that means sometimes funding people who are just looking for a handout, so be it, as long as God’s will is done.

All that said, even if the Thessalonians verse is being misused, there is no question, it is a real verse, so if we’re saying here that many of the common uses of this verse are wrong, what is the real purpose of the verse? You can only understand that by digging deeper into the Word. Let’s look at the whole passage instead of just that one tidbit.

In the name of the Lord Jesus Christ, we command you, brothers and sisters, to keep away from every believer who is idle and disruptive and does not live according to the teaching you received from us. For you yourselves know how you ought to follow our example. We were not idle when we were with you, nor did we eat anyone’s food without paying for it. On the contrary, we worked night and day, laboring and toiling so that we would not be a burden to any of you. We did this, not because we do not have the right to such help, but in order to offer ourselves as a model for you to imitate. For even when we were with you, we gave you this rule: “The one who is unwilling to work shall not eat.” – 2 Thessalonians 3:6-10

We must remember that, at this time, Christianity was still a growing faith. It is the mission of all who believe to spread the Gospel, however, at this time it was even more important because most people in the world had never even heard of Jesus. As you can imagine, organizing a new religion was a busy endeavor, and Paul was right in the midst of it. In this passage, he is giving instructions to those that he has had a part in bringing into the Faith. He is telling them to avoid people who have no desire in working to benefit the greater effort, and he’s also using himself as an example for how the people should have behaved. He was diligent in his work, and he expected that from everyone else that professed to serve the Lord. Paul was certainly not telling his followers to ignore the needs of the less fortunate or to treat those who have fallen on hard times as if they were useless and undeserving of care.

Of course, the Spirit can always lead you to take something from this passage that is outside of the literal explanation. For example, it’s fair to say that this passage is making the deeper point that our faith should be active and not passive. That if we truly consider ourselves to be Christians, we should be actively doing God’s work. We should not think that because we have been saved through our faith that we can just sit idly by and wait for the rewards.

Yes, the Bible is rich with wisdom, and it is absolutely possible that different people can read the same verse and gain different insights. Still, any understanding of the Word that does not come from God is bound to be flawed. When we read the Bible, we need to rely on the Spirit and genuinely seek enlightenment. We can try to take from the words what we want them to say. However, reading in that fashion can lead to pushing Biblical rhetoric that actually contradicts God’s will. It’s His Word, so let’s take it in and send it out His way.