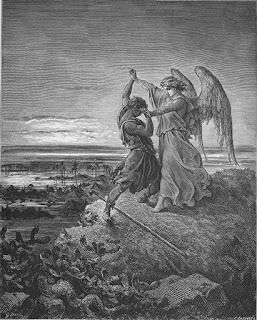 As we know, Abraham’s son Isaac survived God’s test of Abraham. He grew up and, just as God promised, Isaac became Abraham’s heir. He inherited Abraham’s power and estate and carried on Abraham’s legacy. God promised Abraham that he would be the father of a nation. Of course, that is a promise that would take generations to come to fruition. Isaac represented the first generation in the growth of Abraham’s nation, and he in turn contributed to the fulfillment of God’s promise by having children of his own. One of his children was named Jacob. Jacob had an interesting and, what some might consider, bizarre life.

Jacob knowingly lied to his father and stole his brother, Esau’s, birthright (Genesis 26:34 -28:9). That was one of the first notable things that happened in his life. Right away, we see that Jacob isn’t one of the blameless characters like Noah or Abraham who had been instrumental in the Bible’s story up to this point. From the very beginning of his story, we know he’s flawed. What’s curious is that God’s reaction to Jacob isn’t necessarily what we might think. Instead of immediately punishing Jacob, God sends Jacob a dream that confirms that, despite how he came to it, he would inherit Isaac’s blessing and carry on Abraham’s legacy (Genesis 28:11-20). Jacob winds up serving his uncle, Laban, who gives Jacob his two daughters, Leah and Rachel. In our modern society, such a thing would be considered a completely foreign concept. To make matters stranger, his two wives engage in a child bearing competition of sorts that comes to involve their servant women. Jacob finds himself making many children with several women, all in the confines of what is allowed through his marriages (Genesis 30). Jacob eventually leaves Laban’s employ and returns back home escaping his brother’s wrath and claiming what God promised him.

In that abbreviated version of the story, it seems like Jacob got away with his original transgression. After all, in the end, he received the blessing that he originally stole. While that is true, to only acknowledge that part of the story is to make a mistake that we often make in life. We see the beginning and end points of certain incidents and storylines and miss everything in between. To modify a popular saying, "God is in the details." Jacob had to leave home to escape his brother. He fell in love with Rachel and had to work hard to earn her hand in marriage, but that only came after he was first forced to take Leah as his wife even though, at the time, he did not want her. He ran afoul of Laban and had to flee with his family. The fact is Jacob’s life was complicated. God rewarded him in the end, but claiming his reward was not easy. Maybe God always intended for Jacob to carry on Abraham’s legacy, but Jacob’s underhanded way of receiving that blessing may have been what led to his life being harder than necessary.

People who only look at the endpoints of Jacob’s story may miss another important point. Despite being flawed, he was still faithful and obedient to God. When God gave Jacob his dream, Jacob accepted it as truth without question and marked the land God promised. When Jacob was hiding from Laban, God told him to go back home, and Jacob obeyed right away. When God told Jacob to go to Esau, Jacob did so even though he was afraid of what Esau might do to him. God was with Jacob at every point in his life, and whenever God spoke Jacob obeyed. Jacob wasn’t rewarded in the end because he tricked Isaac into giving him Esau’s birthright. Jacob was rewarded because despite the troubled beginning to his story, he still kept God at the head of his life and doing that always pays off.

Jacob’s story is surprisingly easily applied to our own lives. While the details may differ, we all go through ups and downs in our lives. Our lives take turns that we don’t expect and leave us in circumstances that we sometimes don’t know how to handle. We all seem to wrestle with daily problems, the people around us, and even God. Well, Jacob did the same, both figuratively, oddly enough, literally. Yes, Jacob actually physically wrestled with an angel representing God and won...sort of.

Then the man said, "Your name will no longer be Jacob, but Israel, because you have struggled with God and with humans and have overcome." - Genesis 32:38

The encounter was symbolic of Jacob's life.  God acknowledged that Jacob had been through trials and declared that Jacob had come out of them triumphant.
We have to learn how to be like Jacob and trust God in and out of our trials.  We have to let God navigate us through life. Like Jacob, we are all flawed, but sometimes it may even be the wrong that we do that starts us down the path to righteousness. No matter where our lives take us, if we keep God at the head, we’ll end up just where he wants us to be, and that’s always just the right place for us to be.
Chris Lawyer
Image Courtesy of www.biblicalarchaeology.org