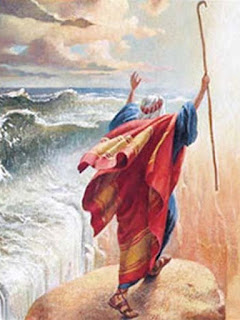 The Bible is full of important people who did significant things in service to God. Many of the people mentioned in the Bible are well known both by those who believe in God and those who don’t. Moses is one such character. He is likely one of the most prominent figures out of everyone in the Bible, potentially second only to Jesus himself. Like Jesus, Moses’ story is told through multiple books. However, the most well known portion of his story is probably the part that takes place in the book of Exodus. Due to multiple movies and other cultural references, the story of Moses leading the Israelites away from bondage in Egypt has transcended the pages of the Bible and become part of the greater culture of the world at large.

In some ways, it is good that a Biblical story has become so famous. Through the telling of the story, people who may not otherwise be exposed to the Faith can come to learn something about God. However, a drawback is that sometimes God’s place in the story can become watered down and seen as something not to be taken seriously. As Believers we have to remember that these stories are more than tales meant for entertainment. They teach us important lessons about God and what we need to know to live godly lives.

After the events in Joseph’s story, many of the Israelites had found a home in Egypt. When a new Pharaoh rose to power, the goodwill that Joseph had built for the Israelites in Egypt was lost. The Pharaoh saw the Israelites, who had grown substantially in number, as potential enemies and felt that he needed to do something to curb the threat that he felt they represented. He took drastic measures by giving an order to have all male Israelite children killed immediately after birth. Those were the conditions under which Moses was born. Right away, we see that God was with him from the start.

In a desperate attempt to save her son, Moses’ mother tried to hide him, and when she realized she could not continue to do that, she sent him down a river. There are many ways that action could have gone wrong. Instead, it worked out in the best possible way. Moses was discovered by Pharaoh’s daughter. She saved him, allowed his real mother to nurse him, and raised him as her own son. Moses went from being a child in danger of being killed before he even got a real shot at life to being put in one of the most privileged positions imaginable at the time. This change in fortunes is pretty similar to what happened in Joseph’s story, but Moses was a very different person than Joseph.

Both were principled people, but where Joseph was more thoughtful and reliant on God, Moses was impulsive and acted on his own accord. He could have clung to his acceptance in Egyptian society and looked down on his fellow Israelites who had been enslaved. He didn’t though, and that is a testament to his character. Still, his decision making was not always the best. When seeing an Egyptian abuse one of his fellow Israelites, Moses decided to kill the Egyptian and hide the evidence. His attempt at getting away with his crime failed. The Pharaoh found out about what Moses had done and sought to have Moses killed. Moses fled to a place called Midian to escape the Pharaoh. There, he met two young women. The way they described him after that encounter is interesting.

When the girls returned to Reuel their father, he asked them, “Why have you returned so early today?” They answered, “An Egyptian rescued us from the shepherds. He even drew water for us and watered the flock.” - Exodus 2:18-19

Moses was an Israelite, and he was loyal enough to that heritage to kill over it. However, outsiders did not see him as such. They saw him as an Egyptian. Even his fellow Israelites did not necessarily see him as kin. That was demonstrated through some of his earlier interactions with them. Neither of those things stopped God from using Moses to save his people. The Pharaoh that ordered Moses be killed eventually died, and Moses was living in peace in Midian married to one of the young women that he had first encountered upon arrival there.  Moses was not necessarily living as a Hebrew when God contacted him. It is unclear to what extent Moses even followed God at that point. However, when God called, Moses immediately recognized Him. God informed Moses that Moses would be the instrument that God would use to save the Israelites. As many of us would, Moses questioned God’s decision. He wanted to know how he could be expected to address the mighty Pharaoh. He wanted to know how he could convince the Israelites to listen to him. God answered the questions and told him that he would take the Israelites out of Egypt and they would be gifted with much by the Egyptians.

Given the reality of the circumstances at the time, what God promised might have seemed crazy. We have probably all been in situations where God’s promises seem unrealistic, but as Believers we have to trust that God will fulfill those promises no matter how unlikely it may seem. This story is a good demonstration of God’s faithfulness. After all, God’s tasking of Moses was itself a fulfillment of the promise he made to Abraham.

During that long period, the king of Egypt died. The Israelites groaned in their slavery and cried out, and their cry for help because of their slavery went up to God. God heard their groaning and he remembered his covenant with Abraham, with Isaac and with Jacob. So God looked on the Israelites and was concerned about them. - Exodus 2:23-25

We should also understand that God’s promises aren’t necessarily fulfilled with ease for us. If the promise seems like it would be difficult to achieve, then it very well may require much from us for it to be fulfilled. When God first told Moses that he would have to deal with Pharaoh and would free the Israelites, God didn’t mention anything about Moses (with Aaron) having to upstage Pharaoh’s sorcerers or Moses having to be the harbinger for the 10 plagues or Moses having split a sea down the middle so that the Israelites would have a path to safety. Yet, we all know from the story that all those things took place before the Israelites were free.

Moses’ story teaches us that we don’t have to be perfect for God to use us. It also teaches us that we can never be sure just how He will use us. However, if we have faith in Him, we can accomplish the biggest feats in the most amazing ways. If Moses’ story had ended there, it would have already been suitable to give Believers perspective on what it means to believe in and follow God, but his story was not finished. In some ways it was just beginning. There is plenty more from Moses to be put under the spotlight.