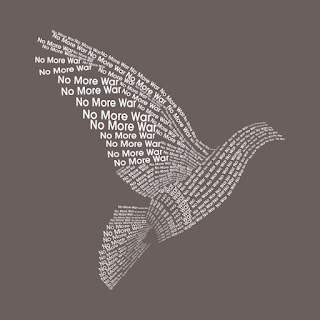 This month we celebrated Veteran’s Day. The day is meant to celebrate the work and lives of those that have served in the U.S. military. The need for a military in this world is unfortunate and undeniable. Conflict and violence have been a part of the human experience for nearly as long as humanity has existed. In the Bible, it goes as far back as the story of Cain and Abel, where Cain slew his brother out of jealousy and envy. While wars may be fought between nations and not individuals, the truth is they often begin because of the same things that cause petty fights between people. Greed, jealousy, hatred or to put it all more simply, sin. Our sinful nature doesn't just put us at odds with God. A lot of the time, it puts us at odds with each other, and all too often we allow our conflicts to devolve into the worse actions and people die as a result.  God hates violence. The violent nature of people was what angered God enough to want to destroy most of humanity.

God saw how corrupt the earth had become, for all the people on earth had corrupted their ways. So God said to Noah, “I am going to put an end to all people, for the earth is filled with violence because of them. I am surely going to destroy both them and the earth. - Genesis 6:12-13

As we know from the story, God stopped short of completely wiping out humanity. Because of Noah’s goodness, the human race was given an avenue to continue, but it wasn’t long before the violence of Man reared its head again. In fact, much of the Old Testament revolved around war. War was such a central part of human society that in guiding the Israelites, God had no choice but to essentially support the Israelites in war. War was unfortunately necessary for the Israelites to claim their promised land. It was necessary for them to protect themselves from enemies. And on the flipside, it was often used as punishment for the sin of the Israelites. To be more accurate, more than once, because of their sin, the Israelites found out how bad war could be when they didn’t have God’s support.

One might point out that it was mainly the Old Testament that was so violent. The New Testament had no wars and the violence was relatively limited in comparison with the exceptions of what was directed to Jesus and many of the Christians that followed. The New Testament focused more on love and the Christian directive to spread love along with the truth about Jesus. Still, make no mistake, even in the New Testament, it was made clear that mankind had not moved past its violence and probably would not in the near future. Jesus himself made that much clear. When he spoke of the things that would happen before he returned, he said:

You will hear of wars and rumors of wars, but see to it that you are not alarmed. Such things must happen, but the end is still to come. 7 Nation will rise against nation, and kingdom against kingdom. - Matthew 24:6

That’s not to say that we shouldn’t expect an end to the madness. Ironically, the Old Testament gives us one of the clearest indications that one day, we can expect to move beyond the violence. When Isaiah told his vision of the time when the Lord comes back, he said:

He will judge between the nations and will settle disputes for many peoples. They will beat their swords into plowshares and their spears into pruning hooks. Nation will not take up sword against nation, nor will they train for war anymore. - Isaiah 2:4

That day has not yet come, and no one alive knows when it will come. So for right now, we have to expect that the horrors of war will continue, and we will need brave people that will stand and fight. Those people should be honored. We all have values, faith in something, and a nation in which we live, but not all of us are expected to fight and potentially die for those things. It takes courage to do so even when you have God on your side.

We can’t stop with just honoring them. We must also pray for them. We need to pray for their safety and lives. We need to pray for their families who share their sacrifices and hardships. We need to pray that even when they engage in the violence that God abhors, that they carry Him with them and do all things in his name according to his will. We need to pray that those who lead and are in command of the military make the right choices and use war to protect and save and not simply to destroy. Most of all, let us pray and thank God for his love in spite of our violent tendencies. We should all look forward to the promised time when we will no longer need to honor veterans because there will no longer be a need for people to live their lives preparing for and fighting wars.